So I love Indian food. I haven't always been familiar with it and honestly only since meeting my husband have I truly grown to love it. (Always liked it just had to deal with someone who thought it all tasted the same, would make the house smell and the flavour from one thing gets into everything else...*sigh* )

Anyways as husband explains it - England is like the home of Indian food (I don't get it but that's what I'm told) and despite this fact when we visited England we actually never went out for Indian food.  We do have some favourite Indian food spots here in the city and Samosas have always been one of the things I love so when I came across this recipe in Canadian Living The Ultimate Cookbook I was very excited and knew I had to try making it.

These little pastry filled jewels are not hard by any imagination but they are a time consuming process. The entire thing took me well a long time (I was tag teaming two recipes) but I would say in total it would be a good hours worth of work so next time I would double the recipe and make more of them for probably not that much more time.   The most time consuming part of it was the filling of the Samosas so I figure if I can prepare everything next time and rope in some help for that I should be good to go.  The pastry is very similar to making a puff pastry so I treated it like that and had a good result. I learned the very important part of making sure the dough is sealed ALL the way around. But other than that this was a big success - so much so I didn't get many pictures and the monkey managed to try and sneak some every day for lunch and then would grab them out of the fridge for a snack - they didn't last long at all! I served these with the two chutneys I made (see recipes here) as opposed to the Cilantro Chutney in the book.

The last point I'll make here is about kitchen equipment - buy thermometers and use them appropriately.  I have 4 of them:


Posted by Cassandra at 8:30 AM No comments:

So I have made pasta before - nothing new right?  Well yes and no - I am still counting this for the 366 challenge as something I've never made before because everything in this meal was done from scratch.

So I have to admit that I am a HUGE lover of Fettuccine Alfredo (well more so the Alfredo sauce than the actual Fettuccine - I usually opt too have cheese filled ravioli with Alfredo sauce on top ... yes I love cheese!)

In any event this week was the husband's birthday so I figured I would give him the option of what he wanted to have for supper on his birthday.  I sent him a list of the things I had been planning or thinking of making and his response was simple - pasta, with Alfredo sauce and maybe some chicken. Now I will totally admit - that I contemplated making the stuff from the box and jar - but since I had a new pasta recipe on my list I figured why not make this into something that will fit into my challenge while I'm at it.

I then thought about the Alfredo sauce and that it probably wasn't too hard. OMG I was so right - the sauce has minimal ingredients by chance I had at the house in any event so I set off.  Mind you that I still have a pasta machine that I have to crank by hand (OMG just FYI - a  lot of work - I would love to get the attachment for my Kitchen Aid Mixer but for now I'll just keep working out my arms lol).

Keeping in mind that I had several things on the go I made the pasta first - I haven't really let my pasta to have the chance to rest before and I wanted to try this recipe entirely as directed. After I finished the pasta and my preparation for chicken tikka to be served another night I got together my mis en place for the Alfredo Sauce, seasoned the chicken, pre-heated the oven and off I went.

I rolled most of my pasta before starting my chicken on the stove and then went back to finishing the pasta.  I then made the sauce before I boiled the pasta since the fresh pasta doesn't take that long to cook. The end result was very delicious and made the birthday boy very happy :D

I will also say that this was by far my favourite pasta recipe so I will likely keep it as my stand by.

For the Chicken - honestly I rubbed it down well in salt and pepper, some basil and herbes de provence. I then put the chicken into a searing hot pan that had been coated in oil (I did use olive oil - bad choice as it has a low smoke point which means the oven did get a little smoky as I put the chicken in to cook through - next time I would use vegetable oil).  I turned the chicken once to get a nice sear and golden colour on both sides before putting it into the oven.

Posted by Cassandra at 8:30 AM No comments:

When you can consider a failure a success

I think I'm pretty normal (pause wait for the fits of laughter to subside) but no really I think that generally speaking I'm fairly normal in terms of my fears, thoughts and feelings.

I've said its before and I will say it again - I come across as a person with a lot of confidence but usually I'm shaking in my boots waiting for the moment I can crawl back into a hiding spot and cry - like honestly I am terrified of failure and particularly public failure. It is one of the reasons why being public about my challenge is very scary - I'm terrified to fail and to fail publicly. However, I need to find a way to get over that in life.

In any event one of the things that has been driving me in life has been the desire to compete on MasterChef Canada - I think I could and I have also been told that I could probably do this by several people. However, there have been vocal people (my parents) who have actually said that they didn't think I could do this because I depend too much on recipes and I don't have enough creativity or knowledge on my own. (Don't even get me started on that... I do follow a recipe very closely the first time I am making something from a recipe or when I am baking).

My husband - who is my biggest supporter - thinks I could kick ass but also doesn't think I am ready yet.  He says I'm not ready because I need to start working on some of the challenge type things they have you focus on during the show and develop some of my other skills. So one of the things he said I should start trying is having a time limit and no recipe and then thinking on my feet about what to make. So that is exactly what I did!

I set myself a 30 minute time limit and had no plan to start. So I looked in the fridge - I had a whole chicken, head of cauliflower and potatoes.  So I knew I wanted to do a roasted cauliflower puree, potatoes and chicken breasts. 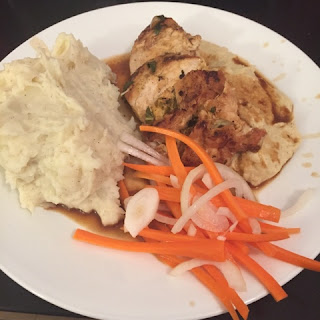 I started with the roast cauliflower - I cut down the head into florets and spread them on a cookie sheet. I found some indian spices that were speaking to me and put that in some olive oil and then tossed the cauliflower in the oil and spices. I threw them in the oven at 350F to roast.

I started in on the potatoes - peeling, cutting into small chunks and into well salted boiling water.

I then broke down the chicken - cutting off the wings and legs followed by the breasts. I used a cast iron ban with hot oil before putting the well seasoned chicken breasts into the pan, to add flavour I used lemon and orange juice over the chicken with some garlic to flavour the chicken.

Now I definitely went over the 30 minutes I had set out for myself and that largely had to do with my plan.  I should have started with the chicken and then worked my way to potatoes and then cauliflower. Shortening the cooking time by cutting the potatoes smaller and turning up the heat on the oven (I could have also skipped cutting up the cauliflower and done slices of the head because they were being pureed anyways). I wanted some veggies so I marinated onions and carrot in some olive oil with some salt and pepper.

The food in and of itself tasted amazing. However, when plating I realized that I had two mashed/pureed items on the plate and I should have left something whole to give different textures.  So while a failure in terms of textures on the plate and having it poorly composed - the food itself was amazing.
Posted by Cassandra at 12:44 PM No comments: