In my bag I will always have blistex, a couple of miscellaneous pens, a small pad of paper, a hair brush, hair elastics, my wallet, often and empty business card holder, tooth brush and tooth paste.

I generally have a general pharmacy in my purse (Tylenol, Advil etc.)
Posted by C. at 12:33 PM No comments:

We may have had our disagreements growing up about what I wanted and what you wanted. I appreciate that you often let me find my own path and follow my heart.

You may not have always agreed with my decisions and choices but you have always supported me once i made my decisions. The thing I appreciate now more than ever is the help and support you give me in raising my daughter while at the same time supporting me in my career. I often do know if it would be possible with out your encouragement and support.

Thank you for everything that you have given up and sacrificed to allow me to peruse my dreams and hopes.

Day 23- Something you crave for a lot.

Something I crave a lot ... I am going to take this to mean a food item. I often crave a mix of sweet and salty items but the actual item varies from time to time. I really enjoy kettle corn because it is the perfect mix of sweet and salty. That being said I occasionally have cravings for the usual chocolate. The most interesting thing is that my cravings are often influenced by the time of year. For example, right now with fall approaching I have cravings for all things pumpkin - pumpkin spice latte, pumpkin muffins, pumpkin pie ice cream.
Posted by C. at 12:33 PM No comments:

Day 22- What makes you different from everyone else?

I have no idea honestly.

I think some things include the fact that I will pick my own path for many things. For instance, entering university I choose to do something I loved versus something that I had done before (e.g., political science and computer science vs. calculus and chemistry), then I decided to go to law school one day after watching legally blonde (nope that is not a joke) then deciding to have a child while I was in law school because I thought it would be easier than having a baby while being a lawyer.


I also tend to do random things for people just to be nice but it is often misunderstood.

I was on my way back to the office yesterday and looking at something on my phone when a lady asked where Scott street was and I didn't know but looked it up using my iPhone. I then realized I knew the street because I have to drive down it to get to my office every day *I am so smrt S M R T* I asked the lady if she was driving or walking and she said walking. I offered to explain it to her but said that it was a long walk (probably 30 minutes) and the directions aren't that easy because you have to walk to a bridge and then over the river. So I insisted on driving her.

I have also driven down the street and encounter someones poor kitty which was hit by a car and it a bad place in danger of continuing to be hit and run over by cars. So I went to my friends places just down the road and made her give me a towel and come with me so I could move the cat off the street. (FYI the scariest in terms of maybe it's still alive and will attack me type moment of my life)

I also just am going to put the following out there until the secret is revealed... Canada Post number EE094691245CA

Day 21- A picture of something that makes you happy. 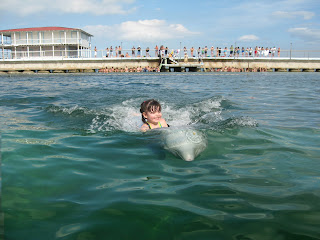 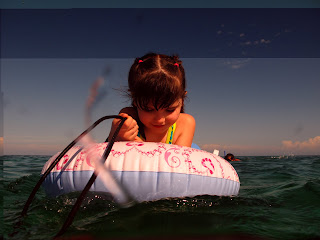 Enjoying a view of the fish and her version of snorkeling 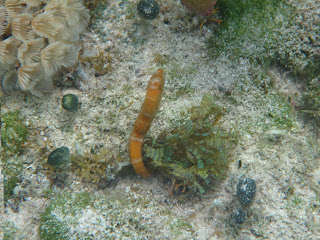 The first and only sea horse I have ever encountered snorkeling - just amazing! 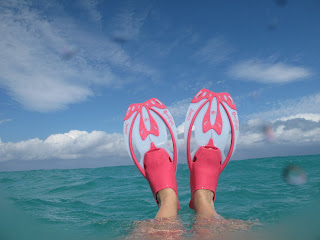 My favorite place to be (notice how these all relate to the same idea..)

Day 19- Nicknames you have; why do you have them?

I actually don't have many nicknames - and in fact I only have one that anyone calls me by and it has been a long time since anyone has actually used it. The nickname is Candy - I wanted something short while I is high school but did not want to use a shortened version of my name so one night we came up with this.

Don't have any other nicknames that I can think of - other than Bird which only my dad uses.