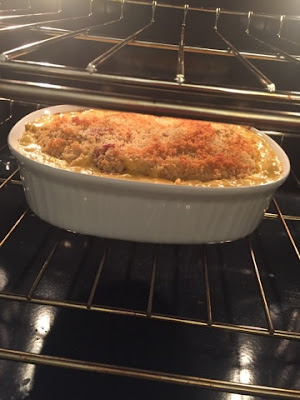 This week I haven't even tried to meal plan - lots of different things going on combine with last weeks failure on meal planning ensured that I had lots of ideas left over for this week ;) (or at least that is my excuse and I'm sticking to it).

Last night we had the usual debate about what to make for supper (I think I'm starting to come down with a cold - so I wasn't  too enthused to go cook).  I had picked up cheddar smokies when grocery shopping because someone complained mentioned they haven't had sausages in a while so I was determined to use them. However, husband wasn't necessarily in the mood for sausages and made a specific request for Mac and Cheese (not the box kind).  Usually when I have done my Mac and Cheese I have added Candied Bacon into the mix (Monkey's favourite) but Justin has often mentioned I could just add sausage so I figured why not kill two birds with one stone.  I have a basic recipe that is wonderful to work off of - but since this was going to be made with the cheddar smokies instead of bacon I figured I wanted to try and spice things up or change up the recipe a bit.  Since I have been working with a lot of typical Indian species lately I figured I would try out that combination (worst comes to worst I'd pull out some tomato sauce and we'd have shells with tomato sauce and sausages on the side.)

Anyways I added some of the extra spices into the mix and it smelled amazing (yes I am bragging) but as the sauce began to cook the flavours developed even more and I may or may not have tested several spoons of the cheese sauce before adding it to the shells and baking the dish.  The only downside is that the entire things takes about an hour to make (including the 30 minutes of baking time - but frankly it took me that long to do the dishes so the husband sees it as a win-win lol).