So I have always wanted to make pasta as it seems relatively easy - and frankly once I figured out the basic steps it wasn't too hard.  The biggest issue I have is finding a recipe that is consistent or good to use.  I have found one site that basically pointed out that this is a fruitless endeavour as every person has a different method or directions.


I settled on a basic recipe - Flour, salt and Eggs.  Mix the salt with the flour. Form the flour and salt into a mound with a well in the middle.  Beat the eggs and Add to the centre.  Slowly work in the flower into the centre making sure the mixture is smooth. If a hole is formed in the wall of the flour move the flour to seal it up . I needed and needed the flour and then work it through the pasta roller.  I would take about 1/4 of the dough - on the widest setting and roll it out, fold it back in thirds and then roll it back through again kind of laminating the dough.  This worked the dough and made it really smooth.


I then decided to try and make my food even fancier and was going to stripe the dough (inspired by Masterchef Canada).  Plus I had been working on my fondant and gum paste so I had my cutters laying around. The only problem is I didn't have a natural food die to use so I just ended up using my food colouring gel in black to die the dough. Now this was not my best idea - but I had just tinted a ton of fondant for class and managed to get my hands clean and back to normal afterwords so I figured I could use the same technique and be safe dying the pasta black. WRONG!  One big difference is flour - kneading and working out the pasta requires a slight amount of flour - fondant is sticky and smooth and moist - which means the colour on the hands doesn't dry out as quickly. So yes 20 minutes of scrubbing my hands later and they were a zombie like shade of grey.  I did have court the next day and was worried about the colour. I am happy to report that my hands did eventually return to normal colour.

Now given that this was getting later into the evening things could have gone better but over all i was really happy with the results.  The willing victim of my experiment said it was by far my best creation - both taste wise and in technical skill.

I am just going to say - next time I have everything ready to go I'll try and remember before cracking the egg into the first mound of cheese that it is egg YOLK ravioli so I don't have to scramble to dumb the egg whites somewhere. 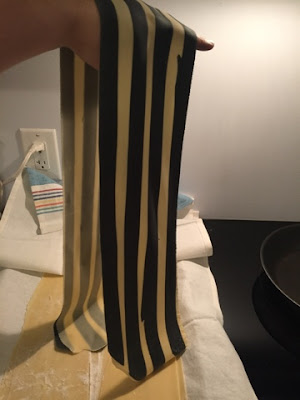 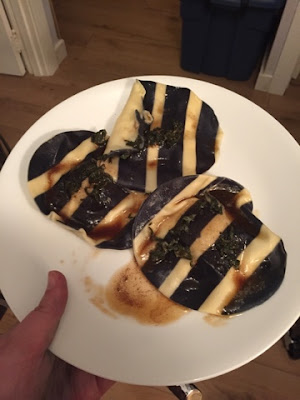