A request for some magic

The magic is needed for an amazing family I have only met once but I can tell you - despite what they may say - I feel like they saved my life and my family.

It all started this past summer when my husband, daughter (11 years old) and I were visiting my husbands family in England and decided to do a road trip around England.  It was an aggressive road trip that we had planned which took us from Birmingham, to Holyhead back through to Blackpool through the Lake District to Penrith, up to Carlisle where we would cross over to Hartlepool down through York and back to Birmingham.  We left on a Tuesday and got back on a Saturday - spending each day getting up driving and exploring on the way to the next place spending only one night.

The first leg to Holyhead went really well. The next day we set off on what we knew was going to be our longest leg - from Holyhead to Blackpool then though the lake district to Penrith. Now we were relying entirely on the GPS in our rented vehicle and when we left Blackpool we had set our sites on going to see Scafell Pike.  We travelled through the lake district to a place called West Waters as a stop over point on the way the Penrith.  When we had originally set our route it took us back and all the way around the lake district which seemed odd but again we were just following the GPS. After spending some time at West Water and being amazed by the beauty we got back in the car but because we never actually made it to the mountain the GPS was having difficulty so we had to reset and have it go just to Penrith.  While we did that I looked at the map we had with us and wondered why we had to go all they way around the lake district when the GPS binged and had a new route.

We followed the GPS directions down the small and windy roads until we go to the bottom of a mountain. There was a sign on the bottom of the road that warned about using the road in the winter, there was a phone booth.  The road looked very curvy but nothing crazy. We set up the road and saw a warning side about the steep incline of the road. Little did we know that we were starting to go over Hardknott Pass. Now if you don’t know Hardknott Pass if tied for the steepest road in England with a 33% grade and razor sharp switch backs (that aren’t visible from the bottom).  It is known to be extremely dangerous (al of this we would not find out until after our ordeal).

We started up the pass and quickly realized that this was not going to be an easy trip up the mountain as my husband tried to switch out of 1st gear but almost stalled. We kept going and we scared as all hell wishing we had tried to find another way but again we had a limited map of the area and were relying on GPS. We made it to the top of the pass when my husband hit a pothole that couldn’t be avoided and we heard a loud bang. My husband swore, my daughter asked what was wrong and all of sudden the warning light for the tires came on.  We pulled over and quickly realized we had a very very flat tire. Thank god we were at the top of the pass because there was a small place that was flat that we could move off the single lane road and try and change the tire.

My daughter and I started to freak out. We turned on our phones to see if we could get signal and nothing because we were at the top of a mountain. I knew that there was a phone at the bottom of one side but no houses or anything close. We looked over on the other side and could see a farm house with a light in the field on. After some quick discussion we knew our only choice was to walk to the farm house.

for the safety of the vehicle we left my husband in the car with the limited supplies we had and my daughter and I started the very long hike down the mountain. I could barely keep my composure as my daughter tried to calm me. We allowed ourselves a few minutes of panic as we walked and then tried to keep it together. I kept wondering if someone would be home - if they could help - what we would do with nothing around us. I was scared of who would be living in the home and that i was putting my daughter in risk. 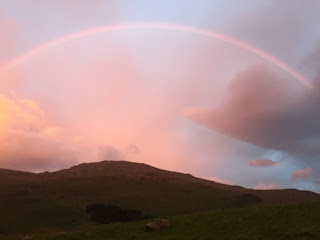 The walk down to the farm house was long and dangerous on the road - much further than we thought. The worst part is we had no way to communicate with my husband whom we left at the top. As we walked a rainbow appeared over the farm house and I hopped this was good sign. I took a picture - this is the only picture I have from the entire experience from leaving at the other side of the pass.

We got to the farm house and knocked on the door. A gruff farmer answered the door and I explained. he closed the door, came back and then handed me a phone.  I tried to call the number we could find for the car rental help line. When I got them on the phone I got very frustrated because they kept asking for the registration (in Canada it would be insurance papers) as I would later find out it was the licence plate number of the car.  I was having difficulty explaining to the people on the phone I couldn’t just walk back to the car and get the information. It started to get colder, windy and rain as I cried. I knocked on the door again and begged for help the farmer took the phone, closed the door and tried talking to the people on the phone. I looked through my phone (the only thing we had brought with us on the walk down the hill) and found a picture I had taken of some of the rental information - funnily enough so we could get out of the lot at the airport. I knocked at the door and the farmers wife answered the door. I gave her my phone and said here maybe this will help.  She left the door partially open and went to give the information to her husband.

At this point I asked if my daughter could use the washroom as she needed to go and not just pee. the Farmers wife left her in and again left the door partially open. At this point i sneaked into the kitchen and just stood at the door and saw their dogs. I tried to make conversation with her (Sandra) while still sobbing - she kept trying to say to me to calm down - it was just a flat tire. my daughter came down and joined us in the kitchen.  Sandra was having major issues with the car rental company - largely due to our location and the time of the day.

As she waited for them to sort out what was going to happen we kept talking and she invited us to sit at the table - she could tell i was still very upset and I explained that we had left my husband with very little at the top of the mountain and I was concerned about something happening to him. We had passed no vehicles on the way up or down but there was a chance and they could have hit the car. Sandra had her husband drive up to the top of the pass to get my husband. During the long wait for him to get back down she kept fighting with the car rental company about what to do as we still had to get to our hotel in Penrith - another hour away. She also called and talked to the Hotel in Penrith to explain our situation, she allowed us to call my in-laws to let them know what had happened.

Our husbands arrived back at the farm house as Sandra was fighting with the recovery company that they weren’t going to be able to do anything until the next day. I was panicking again worried about where we would spend the night. Sandra finally got off the phone and said that they would drive my husband back to the top of the mountain to fetch ALL of our stuff and then drive us to our hotel. This whole experience started around 3:30 pm and us arriving at the farm house around 5:00 pm. Our husbands went up to fetch everything and around 11:00 pm we set off for the hotel - which we didn’t understand meant driving on small tiny roads through the mountain and another mountain pass at night. We got to our hotel just after midnight after which her husband would have to make the trip all the way back to the farm house.

This family - with two small daughters took us in - calmed us, provided comfort and went out of their way to help us and provide us with safety. If they hadn’t had been home or provided help I don’t know how the night would have turned out. They kept insisting it was just a flat tire - but on the dark mountain road in the middle of the night in a completely new situation it was the scariest was thing we have ever faced.

I have no idea where they would want to go - but I think visiting Canada would be amazing for them.

This family deserves some magic in a small attempt to make up for the debt I feel my family owes them.
Posted by Cassandra LW at 6:00 PM