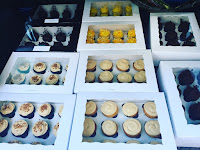 So I love to bake. As much as I love to cook and have the freedom to try different things and not follow the rules or measure carefully. That being said I find baking to be almost magical. That you take certain items, add them together and put them in the oven and something completely different comes out at the end. Now I know and understand thanks to Good Eats and Alton Brown that this is science - it is the reason  why you have to be so specific when baking. 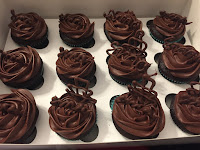 That being said I still find it fascinating. Not to mention I am spending more time now trying to figure out how to make things on my own without a recipe (I just got a book called Ratio: The Simple Codes Behind the Craft of Everyday Cooking) It's an inexpensive book and seems interesting.  I am waiting to try something out until I don't really need it to turn out just in case. 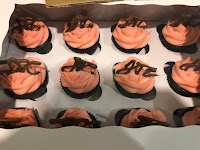 That being said one of my favourite things to experiment with these days are cupcakes! I took cake decorating classes and when we went to class I would go the easy route and buy the often $1 cake mix and just make that (I mean come on - how easy and simple is that!!) It wasn't until the Monkey's birthday a couple of years ago that I started really making my own cake instead of using a mix (now I never use a mix).  All because she said "Mom, your really not making me a home made cake if it is from a box" - I signed because she was right so I pulled out my trusty cookbook Canadian Living: The Ultimate Cookbook and found a classic chocolate cake recipe - it seemed pretty easy - like ok really easy. This is by far the best - hands down - cake recipe ever! I say this because I have had people convert to actually eating cake and convert to liking chocolate cake once they try this recipe. It is good because it's chococlatey without being an overwhelming chocolate. 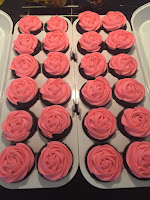 As directed in the recipe I always use coffee instead of water to help bring out the flavour. However at times I have changed that up and have also used mulled red wine (especially around Christmas) I have also done a coffee and Khalua mix with a Bailey's Icing (a B52 cupcake!) the possibilities are endless once you get the basic cake down! Including the variety of different butter cream icing you can use to decorate it with.

The best part about this recipe is that I can usually get it made and in the oven within about 5 to 8 minutes! (you may be asking about the coffee - I usually make that using the Keurig or lately a french press and all I do is put Ice in a bag and let it sit in the hot coffee to cool it down before adding it to the mix.

Preheat the oven to 350 Degrees
Cake: Grease two 9-inch round cake pans, line the bottom with parchment paper. Set aside,
Cupcakes: Line 24 cupcake tins with liners and set aside.