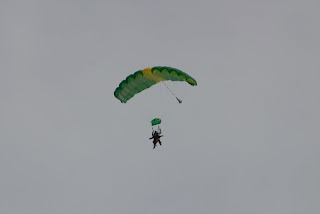 So I just had my 30th birthday and I realized this last September.
Last September I realized that I have been spending my time moving through my life rather than living my life. I have done many amazing things in my life and I can say that I am truly blessed for the opportunities I have had but in all honesty I have not been really trying.
This is what originally started my drive to get back to the gym I wanted to start living my life but because I had let my weight and size spiral out of control I couldn't do a lot of the things I wanted to do.
So I made the decision to go back to the gym - something I really didn't think I could do. Then I did it and started doing it well. Then I signed up to run the half marathon on June 19 (Father's Day) but for a variety of reasons I stopped training and basically didn't run in the 5-6 weeks before the date and made the decision to pull for medical reasons and not run the race.
I accept the decision but regret it in ways. I know I could have made the 13.1 miles no problem - the real problem is that I wouldn't have been able to run or jog it and would have likely walked the entire way. I decided that is not what I wanted to do.
The problem is that this left me with lots of inner turmoil about not doing things because I didn't think I could do them - a particular problem because I had signed up to go skydiving with a friend for my birthday (one week after the half marathon).... and as time grew closer it was definitely something I didn't think I could do.
Then part way through the week I realized that I was over the weight restriction for tandem jumping but there was a chance that I would still be able to jump because I am fairly height weight proportionate.
Anyways I will have to come back and write more about that experience later but I did it and all I have to say is that it was the MOST amazing experience ever and I only live with two disappointments from the entire experience and honestly I can say from now it can't be that bad I jumped out of a plane!
Posted by C. at 6:42 PM