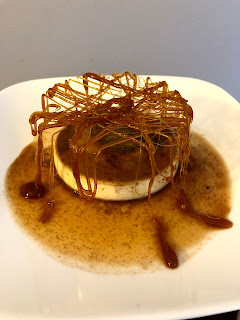 So anyone who knows me by this point knows that I love cooking shows of all varieties - Top Chef; Masterchef (Canadian and US versions of both); Good Eats; Cut Throat Kitchen; Hells Kitchen. I also would love to be on one or anyone of these shows - particularly Masterchef Canada. So I watch the show and see how I could do in similar situations and also to push myself to try and learn new things.


So another MasterChef Canada like adventure. They had a recent episode where the contestants had to make a crème brulee with a caramel cage during a pressure test. Crème Brulee has been on my list of things to make for a long time. However, just haven't had a chance. Ultimately, then with the husband was diagnosed with diabetes it makes it more difficult to make certain desserts because of the sugar content. Then in what I would guess is a sponsored post one of the judges Claudio share a recipe for making a crème brulee style dessert that used Splenda. Now, I know that some people have issue with using artificial sweeteners; however, with diabetes a real concern and trying to find a way to enjoy the same or similar kind of desserts I use them.


Now, I also wanted to try the other part of this challenge of making the caramel cages - so I used Google to find some videos on making the caramel and voila - I managed to achieve a pretty amazing result. That being said while I enjoyed the dessert I was not a fan of the Chair Syrup.  I think I will try a different variation of this the next time and I have a goal of trying a crème brulee in the sous vide. 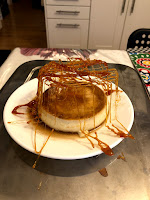