So my husband picked up a Canadian Living Magazine about one pot dishes and I can tell you I was skeptical at first - but we have a rule - the $1 rule.  If the price of the cook book, divided by the number of recipes that actually interest us works out to $1/recipe or less than we can buy the item. However, if the book or magazine is more expensive we cannot get it.

Now this may sound a little weird at first but - when you understand the number of cookbooks I have....(Now there are at least 10 books missing from this picture and are in different places around the house.

So yeah - we have a lot of cook books that I have collected overtime.  and they aren't all just cook books - I have a spice bible (which is amazing by the way).

Anyways so as you can tell - this means the art of selecting new books to add to our collection is a very serious business. So as I said I was skeptical because I've had one pot books before and honestly it's usually not as promised.

In this case - it wasn't as promised either. The recipe actually required two pots/cooking dishes but given how well this receipt turned out I am not going to hold it against the book.

I would make some modifications to the recipe the next time I make it. It was really good but it could have been better. 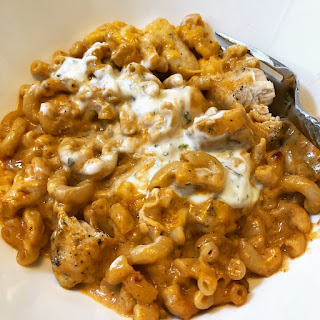 This is a very popular dish in our house hold now.  I didn't want to chop more cilantro and I already had a cilantro lime creama in the house so I used that - it was amazingly good!

Mix well and let mingle for at least 30 minutes.